Brexit could make or break London

As the world's leading financial center, London is highly interconnected with the world, especially the European Union, and indispensable to the prosperity of the United Kingdom's economy.

While the financial services sector makes up a significant part of the UK's economy, according to the House of Commons Library 49 percent of the sector's output was generated in London in 2018. The history of London as the global financial powerhouse can be traced back to centuries ago. It is not surprising then that UK's decision to withdraw from the European Union in 2016 has drawn the world's attention to London.

Brexit would inevitably harm London's status as a leading global financial center in the short term, although it remains to be seen to what extent Brexit would eventually challenge that status.

To compensate for the loss of this privilege, the UK could work with the EU to establish "equivalence". However, this equivalence approach might only grant those institutions in London limited access to the EU financial market and even subject them to unilateral cancellation by the European Commission.

According to the think tank New Financial, given such uncertainty, around 300 financial firms have either moved or are moving at least part of their businesses out of the UK to other financial centers in the EU, such as Dublin, Luxembourg, Paris and Frankfurt.

If the equivalence approach turns out to be indeed insufficient, more banks and companies, including subsidiaries owned by the foreign financial companies, would shift their operations out of London to other EU countries where they have easy access to the EU financial market at low costs. Those shifts will impair London's status as the leading financial center.

In addition, as many businesses move out of the UK, the size of London's financial market would shrink accordingly, although on a limited basis. Some businesses in the financial industry would suffer, while others could maintain their leading positions. The banking industry in London would suffer from Brexit, at least for a while.

The report from New Financial indicates that investment banks have transferred around ￡800 billion from the UK to the EU. On the other hand, current evidence does not support the view that Brexit has had intensive impacts on the clearing houses in London. So, London might still be able to maintain its status as the leading insurance market in the world after Brexit.

However, London would have fewer skilled workers in the financial field shortly after Brexit. Once the UK leaves the EU, the EU citizens may not be able to come to London to work as conveniently as they used to. Data from the Office for National Statistics shows about 7 percent of UK's workforce would be affected.

Further, London would not be able to offer as many job opportunities as it can now, due to downsizing of the financial market and shifting of businesses from London to other financial centers. Having fewer financial professionals would surely affect the quality and productivity of financial services in London. Thus, it would be wise for the UK to set up a migration policy which ensures inflows of highskilled workers into London.

Besides, Brexit's impact on the strength of the pound is tremendous thus far. Many major events, including the vote to leave the EU, triggered the fall of the pound. Just this August, the pound dropped into a 1.20-1.23 range against the US dollar.

Morgan Stanley even predicted that a no-deal Brexit might bring the pound at a par with the US dollar. And a weak currency will threaten the pound's status as one of the most popular global reserve currencies, though it could be conducive to improve the trade balance of the UK.

London needs to adequately prepare to deal with those consequences that can threaten its status as the international financial center.

However, Brexit also enables London to explore new options. Unbounded by the EU regulations, the UK gains its full autonomy over decision-making for trade. It allows the UK to establish new trade agreements on its own with other countries, which could boost its financial services market and secure the status of London.

The long-term impact of Brexit on London is unclear, but regardless of the soft or hard Brexit, autonomy over trade leaves London with more flexibility and could foster the development of its new financial services. From such a perspective, Brexit's impact on London could be evaluated with less unease.

Zhang Huanbo is the deputy director of the Institute of American and European Studies of the China Center for International Economic Exchanges. Mao Tianyu is a research assistant of China Center for International Economic Exchanges. The authors contributed this article to China Watch, a think tank powered by China Daily. The views do not necessarily reflect those of China Daily. 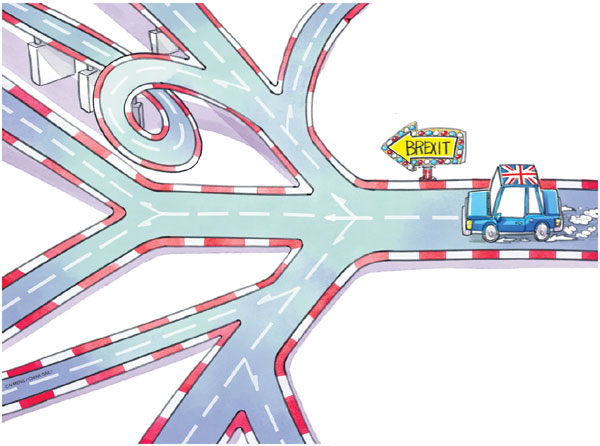